The Effect of Grief and Death On Life and Writing; RIP Commander Freer 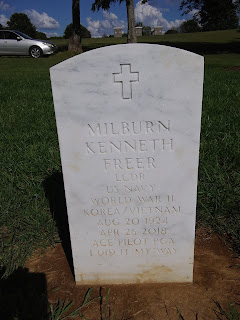 The last blog I published was in Feb when my father-in-law was going down with chronic leukemia in the final stage and worsening dementia. We brought him here to TN in 2015 to live with us here. He had lost his ability to tell scam from reality but could still play an awesome golf game. He could still remember his stories from being a hotshot pilot over 26 years.  He still only used a cane with eyesight and teeth intact at 94.  He was abusing alcohol over those 26 years and diet. He was a man who loved to eat and drink and play golf.  His negative blood work was considered alcohol and diet related. He was a man who wanted everything his way or the highway.  His father was a pistol to take care of and I became his caregiver more than my husband. He treated most men including my husband as under his regimen. He was a harsh man who demanded his way.  I took him off the booze, improved his diet, took him to golf weekly involving an hour trip one way. I knew it was questionable how much good I could do at this point but I am a healer and it was worth every effort  to give it my best. 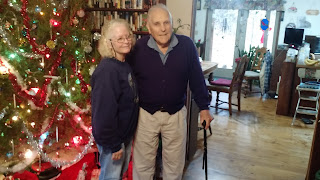 His labs did not improve with his white and red counts dropping. A visit to an oncologist gave us a diagnosis about September 2017 of chronic leukemia in the final stage. That was a shock since his San Diego doctors has chocked it up to drinking.  They dropped two drugs being given to him for cholesterol control since he was dying and they can affect blood counts.  His lab results begin improving bit by bit which gave us some hope.  He had been taking a series of drugs for 25 years so taking him off most of these drugs at 94 was not an option. The doctors did eliminate the two but kept him on the rest. He was dying so what did it now matter.

They gave him 6 to 9 months to live with no treatment options because of his age and health from drinking.  They gave me the option of trying alternative medicine on him which he  refused other than vitamins and some herbs to help with memory. He fought me every step.

In Jan of this year,  I began to see his energy failing and his balance failing as he struggled to play 9 holes that very last time. His memory was going too. He was beginning to get infections and symptoms of the end stage of the disease. He refused to talk about it and I ended up going from 4 hours a day to 24 hours a day trying to keep him out of a nursing home. He refused to use a walker and fell 4 times, refusing help. He was  200 lbs and a big man.  It was his way or none at all.  My whole life became trying to give him his freedom until the end. .  Sadly the last 4 weeks, he got so bad and so hard to handle that he ended up in the hospital fighting the drs and nurses there. He refused to cooperate and fell several times, landing him in the lock up unit of a nursing home. He fought them too. In the end, he made his choice. If he couldn't have it his way, he would not eat or drink.

He died on April 26th, fighting all the way through. The physical and emotional toll on care givers is excruciating on the heart, mind, and soul.  That is not the physical toll. It took three heavy duty nurses to get him to the bathroom but he was mad because we could not take him home.  He would not allow anyone to help him without fighting them. He died refusing all who tried to help him. He was mad right up to the end. He wasn't dying and he didn't need help from anyone. I am a commander right to the last breath.

On his gravestone, along with his service record, it says,'I did it my way!"

We love our family members, even when they are very difficult to love. We watch  and cannot save them often. Their self destruct instinct is too strong. Even if you have given them all you have to give, it still  rips your heart apart. Then suddenly they are gone and your life is supposed to go back to normal but the pain is still present. It affects your health, your life, your writing, your  whole being.


It is now almost the anniversary of  5 months since his death. We are still working with legal issues and bills. I became almost a daughter in the end but its time to get back to life and writing.  His father was a constant factor in our marriage since it began. It is a blessing to have time to give my husband, the time he deserves now. It is a blessing to not worry about each day and what to do about dad at this point. It is time for me to heal and leave dad to God.  So I felt an explanation was in order for my absence on this blog.   As a healer, we cannot always save those we love.


I think to all of you reading this blog today and perhaps going through this or have been through this, its rough.

So thank you all for being patient and I hope you will come back each week.

There are going to be some changes which I will announce next week. I have had some time to really think about my writing and my life, now that his father is gone.  I am 67, and each day must count.  Life is fragile and uncertain, so it is important to make the most of each day and hour. It is important to thank God for our blessings. Those important people in our lives, your spouse, your children, your family and work to make sure they know how much you love them and how you cherish them.

Thanks to you all and God  bless you! Kate, the Herbladyisin
Posted by Cathryn Freer at 12:09 PM No comments: