Well soon it will be time to start germinating your Moringa seeds. Moringa seeds can be tricky. The seeds are very high in protein and tend to mold or rot. They need warmth to sprout and if the conditions are not right, they simply do not cooperate. The trees also freeze easily.  I have to say sadly that all my stock including scented geraniums froze in the moving truck.  The truck had engine problems as were leaving. They could not come out to fix it until the next morning. We had planned to leave that afternoon. We could not take them back in the house because the carpets had been cleaned. The plants were also wedged in the truck to save room.  It took only a short period of time in 33 degree weather, sinking down to a low of 2 degrees by the morning, that they froze.  So if you get frost and low temps, you will lose them. It does not take long.  Here is a picture before moving: 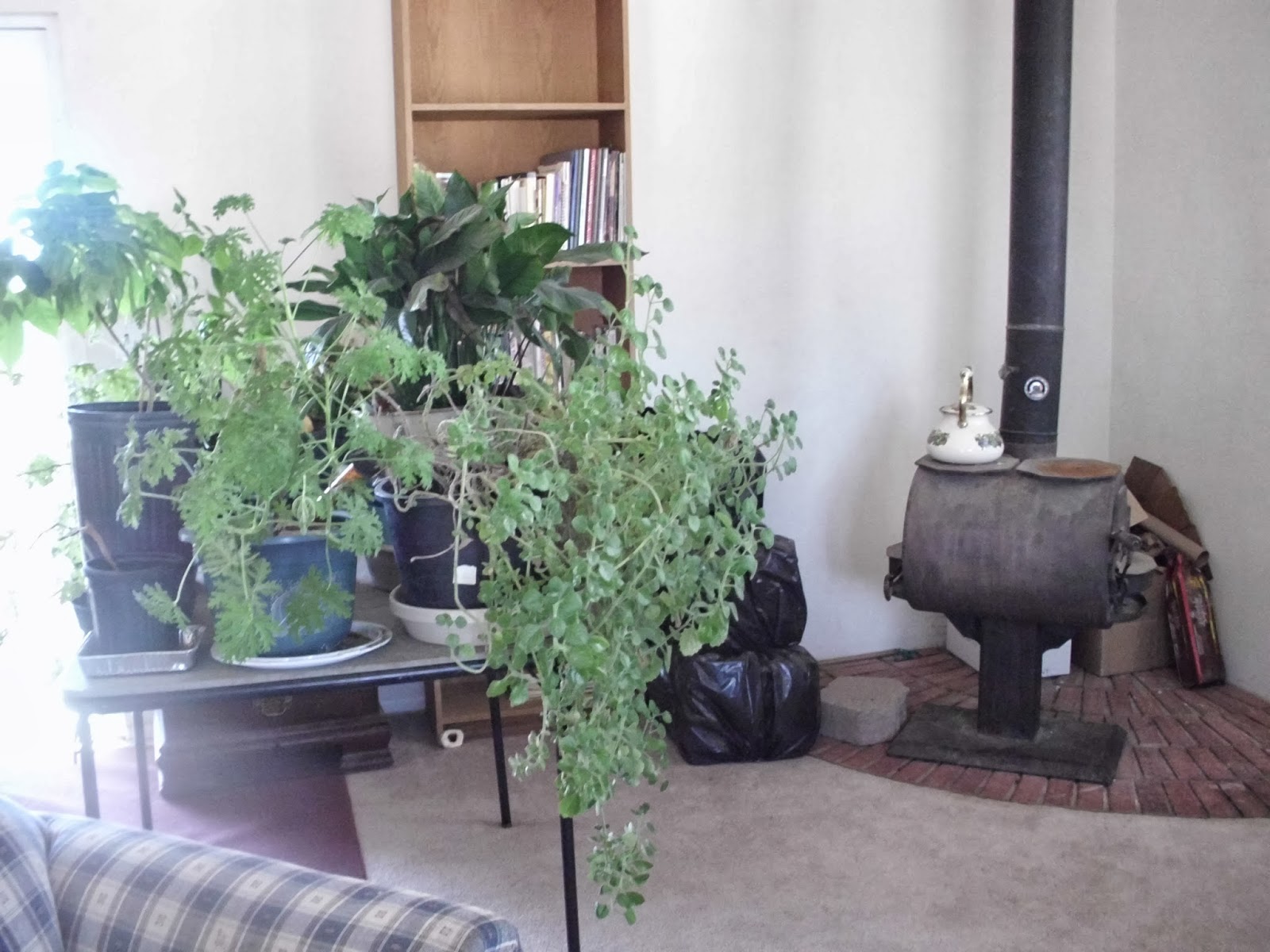 The bright side of this move despite the loss of stock is that we now are back living in an area where they will grow easily. It is in the middle 70's here in San Diego. I have lavender and rosemary in bloom, bees just buzzing around doing their job and new tomato plants growing already.  The lavender and rosemary was planted here by the owner before we arrived.  It has been healing after losing all my stock to have rosemary and lavender blooming in the yard.  One must focus on the positive things rather than the loss.  Spring Valley is one of the most stable, temperate areas of San Diego. The new trees started will be very happy here in the new environment.

The first two methods are suggested by Trees of Life staff.

Germinating Moringa seeds on the Surface of the Soil

#1: Screw up a piece of newspaper into a ball.  Place 5 Moringa seeds into the ball and keep the newspaper moist. Place the newspaper ball in the shade for one week.  Take the seeds after a week that have not germinated and place in a pot with pure sand. Don't bury the seed but place it on top of the sand. Cover the sheet with one sheet of most paper. Leave the newspaper there until the root has entered the sand. Then transplant it into good soil.  This is done because often the microbes in the soil cause the seed to rot when planted into wet soil.

Germinating the Seeds in Soil

#2  Fill small containers with a light soil mixture containing 3 parts soil to one part sand. Plant three seeds in each pot about a half inch deep. Keep the soil moist but not wet. Germination can take up to two weeks. Remove all but one seedling. Pick the strongest one for the pot.

Germinating in a Sandwich Bag

#3  Soak the seeds overnight in water.  Take the seeds out and place in a one gallon sandwich bag. Keep them apart in the bad. Do not add excess water. Put bag with seeds into a warm place such as the stove. It is suggested to take your fingernail and gently pierce the casing surrounding the  seeds before putting them into the bag.

If the area you put the seeds into is too cold, they most likely will not germinate.

I have tried all these methods for experimentation.  Mine still mold at times and I have to start over. I have purchased seeds and had no success in germinating them ...then taken seeds from the same batch later when its warmer and had no problems. The seeds can be tricky.  I had three seeds last year that I planted in an outside planter, forgot about them, and they came up on their own in a few weeks. They struggled for awhile then grew up to be fine trees as you can see.  They were planted in with some lavender and seemed to be very happy. Here is a picture of them from last year. The tree on the right has lavender growing around it. It was very happy. They were in the house after winter set in. 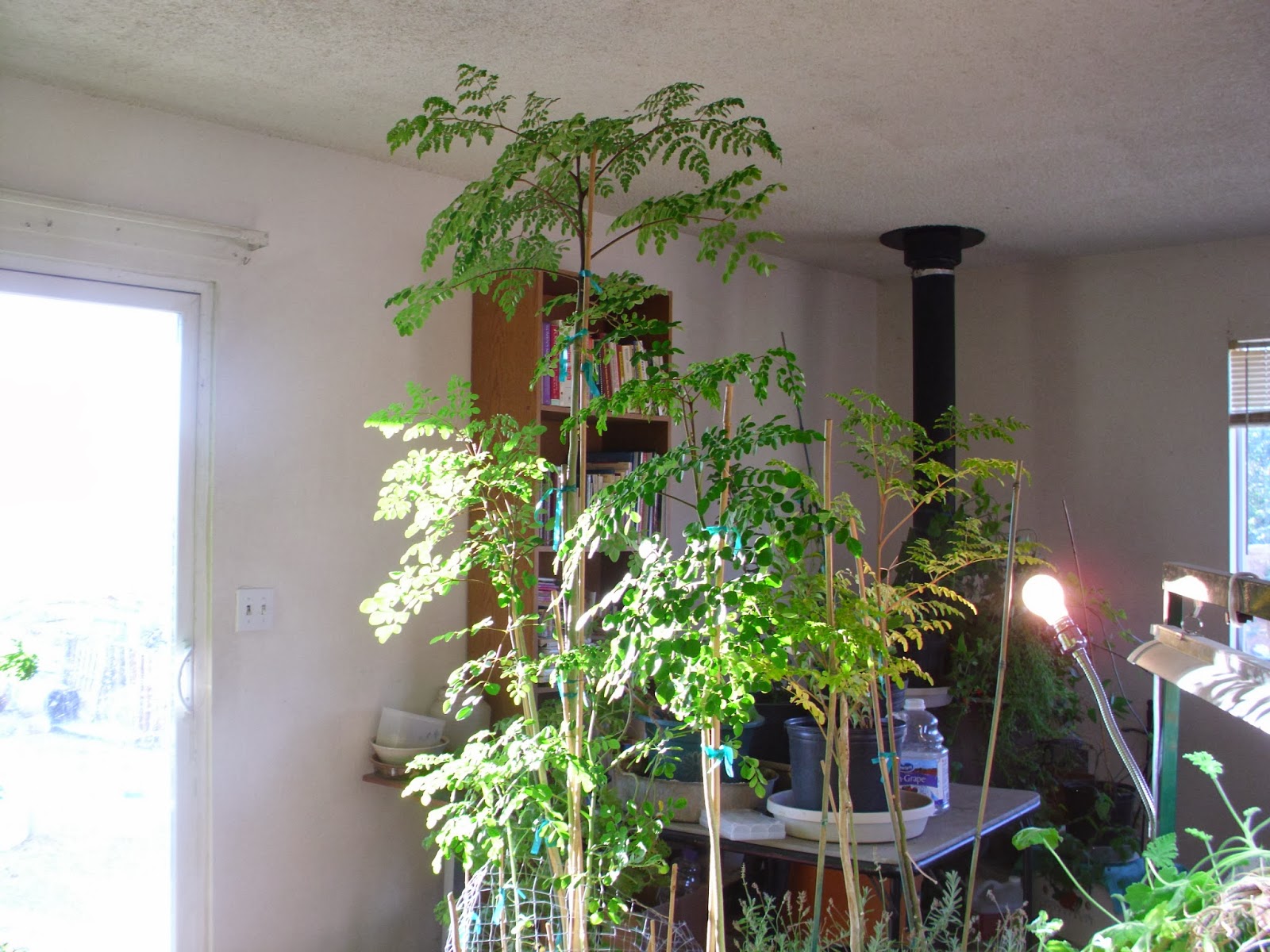 Posted by Cathryn Freer at 7:22 PM No comments: