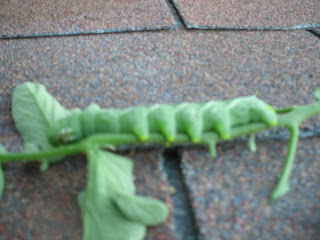 Well I learned a valuable lesson this month. Horn worms eat more than just tomato plant leaves and tomatoes.  They have a voracious appetite for many vegetable plants.

This is the first year I have grown a full garden in a few years. I planted onions and potatoes for the first time ever. The plants grew beautiful with each week. Then something went wrong.  I went out to the garden every morning to find my potato plant leaves stripped. I thought it was quail that were the culprits.  Low and behold too late, I found the evil ones ....horn worms. There were at least 40 horn worms eating their hearts out.  I picked them off for over an hour.  This guy and his friends got away with vegetable plant mayhem. They were big enough to put a saddle on. I found that they will eat pepper plants and Goji berry leaves as well.

The worst thing about them if that they blend in so well into the plant, that they are hard to spot until they have demolished half the branch. I have tri-focals so that makes it even harder to find them when they are small.

Early morning or evening is the easiest time to spot them. The light has to be just right. Look at your plants from different angles as well. 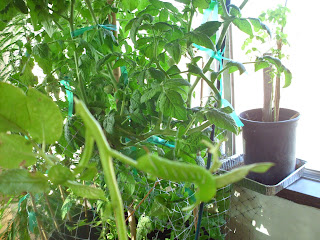 They are sprays and chemicals to kill them, but I don't use toxic stuff on my plants. I have enlisted my husband to help find them, since he doesn't wear glasses.  I now look for these guys the first time I see a branch with missing leaves. If you see little black pellets, that is their excretions. So look for the worms on branches above the droppings. The plants will come back once you pick off the worms and give it some fertilizer to boost the growth. The damage from the horn worms does set it back for several weeks.  I am hoping for my first homegrown potatoes.

Will ducks and chickens eat horn worms? Mine will and they fight over them.  So they at least make the critters a good treat.

Garden Progress so Far:  I am going to write a separate blog of the different types of berries I am growing and why. Each berry has some exciting research on their health benefits. Since most of them are rather expensive at the supermarket, I am growing them here on our place. They do take a lot of water and water here in Stagecoach is very inexpensive.

Blackberry Plants.....first crop this year. Just enough for a treat but next year look out ...blackberry jam. Talking about Jam. My sister in Tennessee makes the most awesome jam in the world. I have found that blackberries is a substitution for chocolate. I have no idea why but it works. I decided to  give up my only vise...chocolate. I never over-ate but always had a little every day. Despite all the good benefits in chocolate, it still is a processed calorie filled food. I felt it could be causing a rash problem so gave it up as an experiment.  At the same time, my sister sent me some of her blackberry jam with real berries and seeds in it. She uses very little sugar. It is mostly fruit.  I used a tablespoon on my toast and found I did not crave chocolate that day. So I have been using it since. The stuff you buy in the store does not work. It is high in sugar with a small amount of fruit.   I now buy frozen blackberries as well and put some into my yogurt.  It really is a healthy substitution when craving something sweet. Blackberries have a wealth of health benefits as well which deserves a blog of its own.  They are expensive so that is why I planted a blackberry patch this year. I will expand on it next year. Mulching and lots of water is the reason for my success in this harsh climate.

Aronia Berries:  Two out of three plants survived and are thriving now.  They will bare no berries this year but next year should be great. I am growing berries that are the highest in ORAC Values and health benefits. I bought seeds so will grow a whole row of them next year.

Elderberries:  I have three small bushes that have struggled for survival. I won't know until next spring if they can be grown here. The people who I bought them from, experts, have told me they should do fine.  The final verdict is out until next year. I am giving them all the care I can. 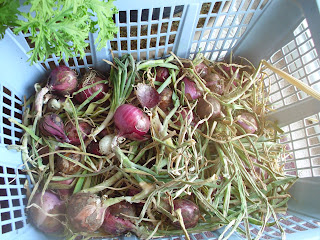 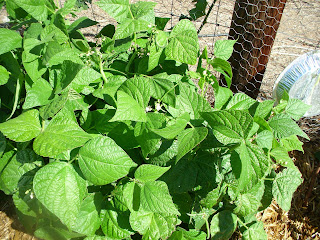 Green Beans:  ready to pick in a few days.....this was from 20 year old bean seeds we found in an old house we stayed in for a year.  It was an experiment to see if they would sprout and actually have beans. Pretty cool for 20 year old seed.


Tomatoes:  Those are doing great! Most of them grew up from left over seeds in the soil from last spring. I didn't plant new seed.


Goji Berries:  I would have pictures of the fruit but I keep eating them first. The picture below is of the bushes. The house serves as a windbreak against the winds. They have done exceptionally well here despite being uprooted several times in moves. Next year they should have twice as many berries.  They are so good for you.

Squash Plants: I have vigorous plants that are just starting to bare baby squash.  We have picked the first ones this week.  Interestingly, the ducks love the leaves. They eat them up like candy. Next year I will grow some extra bushes for them to feed on. Their need to forage is rough in Nevada....no much for them to eat. They get Comfrey leaves, Swiss Chard leaves, squash leaves, and weeds as additions to their pellets when I can find them.  They will only eat their duck feed if nothing else is available. They eat red ants too which is one reason to have them on the land.  They eat lots of bugs and work hard for their duck feed.

This year has given me much greater inspiration for growing here.  You must be smarter than the winds and the harsh elements.  That involves experimenting and being innovative in your gardening methods. Overall I have succeeded in most of the gardening endeavors here.  I hauled my Moringa trees outside.  I put them with the house as a windbreak.  This was several weeks ago. I will have pictures soon here.  They cannot be left out after about the middle of November when the first frost will hit.  So matter how much innovation I use, Moringa trees do not survive freezing temperatures.  There is only one other option for winter and that is a heated green house.  So that is just the reality.

Join me  below for articles not allowed on Google that are about masks, the current virus shutting down our country and other topics that are banned on Facebook, Google and other media.

Herbally Yours, Kate Freer, The Herbladyisin

Posted by Cathryn Freer at 5:05 PM No comments: