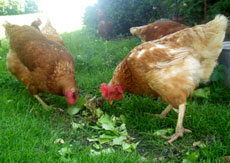 I say this as our two almost grown kittens ate another seedling.  I have the big ones fenced off in their containers but had several small pots with seedlings in our back room where they get great light. I thought I had them safe but I was wrong. They ate one of my gingko seedlings too.....they won't have memory problems at this stage I guess.

All our farm animals love Moringa.....
The other day I trimmed several trees and took the leaves out to the goats. They chomped them right down.  Goats do not eat everything...that is not true. Most often they eat what you don't want them to touch, such as my lilacs or my Goji berry bushes.  I got proofed much of the yard over the past week.  I like to have them out for a little while to spend time with them, but......... .  They are like teenagers with no supervision and nothing to do on a Saturday night.  I wish I had more trees...it would save money on hay.  So Moringa is loved by most creatures.  I know last year, I fed the rabbits branches every evening until they froze.  Comfrey is another one they will all eat. I had to build a cage over my comfrey patch to save it from the chickens.

I figure it this way, if it isn't the goats or chickens, we have quail, Chuckers, and chipmunks that would eat our stuff.  So when I fence them off, it applies to all of them. Grape leaves are another sought after food for all of them.  So finding a way to live with both the wild critters and the farm critters involves some work.  We found a place who has 200 wood pallets sitting around for free. I have made a goat pen, an isolation pen for sick animals,  a fence around one area to protect the Goji berries and fenced in the area around the grapes.  We only spent gas to pick them up.  They saved us from having to buy fence posts, field wire, and a lot of trouble.

Treating Sick Chickens with Herbs: Garlic and Colloidal Silver
For the first time in all the times I have had my own flock....two are sick with some kind of respiratory infection.  It causes their eyes to become infected, the nasal areas get infected and they are really sick.  After isolating the two with symptoms,  I researched the subject online.  The easiest way to treat them is with standard medicine in their water. The problem is that when they are sick, they don't drink or eat much. They just sit in a corner and look like they are going to die at any minute.  I don't like antibiotics or what effect they have on the chickens digestive systems. So I chose to treat them with herbs. So with the main flock, that were not showing symptoms as of late, I took dog food and soaked it in garlic powder and dry milk making a thick mush. When the dog food was soft, I fed it to them. They ate it well.  This has been three days, and so far none of the rest are sick. They will have to be watched for two weeks.  I also put colloidal silver in their water.

The two sickest chickens in the isolation cage were pretty sad. One was much sicker than the other one.  I took liquid Kyolic garlic and have been giving them a dropper-full  three times a day.  Liquid Kyolic garlic is the easiest way to treat animals. The container has a built in plastic spout with which to administer the liquid. It has had a tremendous amount of research published on its power. I have used it often over the years on different kinds of animals infections and health problems. Garlic works against most organisms.  I took a dropper of silver and gave them that as well. I also put a few drops of the silver solution in their eyes. I opened their eyes up first with a warm compress. Their eyes were sticky with the infection.  I put some silver solution into their water although they don't seem to be drinking much at all, which is the problem with medicine in their water.  The sickest one is still sick but doing much better. It remains to be seem if she will pull through. If she continues to improve over the next week, then that is hopeful. The other one is definitely on its way to being recovered. They must remain isolated for a month.  All of them will have to be watched as well for that period of time.  So far it looks good for their survival.  The one thing about herbs is they either build the body systems, clean the body systems, or act as a potent natural antibiotic.  Garlic, Goldenseal, oregano  all work against bacterial and virus invaders.  They go to the root cause of the infection. They have a large isolation cage to help lower their stress level.

It is important that you wash any clothes you are wearing when you treat the sick ones. It is also imp that you immediately disinfect your hands and arms right after handling them.  You don't want to accidentally  rub your own eyes  or infect the other animals.  I also am taking an immune product just in case. I can remember years ago treating puppies with Parvo and getting sick as well. They will tell you it can't happen, but that is not true. I did save all the puppies but one.  The vet told us it would cost several hundred dollars and that they probably would not make it anyway. I treated them with Goldenseal.  Of all the animals I have treated over the years with alternative medicine, I have only lost one dog and some kittens. I have been successful the majority of the time.  We had a dog that got hit by a car. It was dying. I gave it cayenne pepper and that saved its life....it was bleeding. We still had to pay for a broken leg but the cayenne kept it was dying from shock and bleeding.  Cayenne is one of the best emergency herbs to keep in your first aid kit and in your purse. It deserves a whole column or two on how amazing an herb it is.

I will give you an update here in a week how the herbal program worked. ....it is still to early to tell how many get sick.   I hate store bought eggs and you cannot use the eggs for about a month.......

I am closing this for now....hope you had a great weekend.  God bless your week ahead.

Posted by Cathryn Freer at 4:03 PM No comments: