Is Our Food Safe to Eat In America?

Often, readers email or call me on the safety of eating Moringa leaves from other countries. This is an important and valid question to ask but do you really think our own food supply here, produced in America, is safe? No, it is not. If you think so, you are just hiding your head in the sand. Here is an article from today which did not end up on front page news. Too bad.

CHINO, Calif. (AP) — The owners of a Southern California slaughterhouse whose workers were caught on videotape abusing cattle, leading to one of the nation's biggest beef recalls, have agreed to pay more than $300,000 to settle a lawsuit.

The Los Angeles Times reports (http://lat.ms/WdjUmz ) Donald Hallmark Sr. and Donald Hallmark Jr. also agreed to a nominal $497-million judgment against the now-defunct Hallmark Meat Packing Co., which will not be collected because the company is bankrupt.
The Hallmarks were two of nine defendants in a federal False Claims Act suit brought by the Humane Society of the United States.
The government recalled 143 million pounds of beef in 2008 after the Humane Society released video from the Chino plant showing cows too sick or injured to stand being dragged with chains and rammed with a forklift.

Years ago I went with a rancher friend to a  livestock auction.  I watched them unload cattle that were in shock from the ride. One would not get up, it was too weak. They then shocked it with an electric prod. It still couldn't get up so they kept prodding it until it died right on the spot. I threw up, I was so upset. I saw calves, that were sick and weak, underweight in the pens outside as well. I never went to another livestock auction again.

When my children were little, we lived up the road from a chicken ranch. I went in there to ask a question, and saw dead chickens in some of the cages. I saw sick chickens that were half dead as well. That is when I first made the decision to raise my own chickens and eggs. Most of the years since, I have done just that. So I have seen first hand what most of you have not. Most consumers do not really want to know how their food it raised. They want to assume that it is raised in reasonable conditions. Reasonable to whom? Certainly not to the animal shoved into a tiny cage, unable to move or turn.  It is not the meat I feel is bad for you, but the conditions they are raised in, that makes it bad for you. We eat little red meat, because of that. At 61 and 65, raising our own beef is too much work for us.

The government recalled 143 million pounds of beef from this company. This was not the first time, nor will it be the last time that beef, chicken, or some other food will be recalled.  They sold beef for months or years under these circumstances before being caught. You really never know what you eating and its quality....that is the real reality. If it is not cruel living conditions, it is what they are feeding the cattle along with added antibiotics, hormones, and other medicines.

The only real way to know what you are eating is to raise it yourself. Most people cannot do that.  You can hope that the organic meat you are paying a huge price for is really raised as they state on the package. It is sad that we do not really know the state of the food we eat, we only assume with hope that it won't make us sick.

I really want you to consider growing as much food as you can in your back yard, or on your patio.  How great is it to know that the spinach you picked from your own garden, was picked with clean hands, washed properly, and prepared properly. Every tomato, pepper, squash, or bean that you grow, you know where it came from.  Gardening does take effort and work but the rewards are amazing. We brought our tomatoes in the house, so we could reap the remaining tomatoes for at least this month. They were all still green at the first freeze forecast, so in the house they went. . Here in the house, they have ripened into beautiful, delicious red beauties.

The cold frame is still protecting the kale and Swiss chard.  I know all of you are busy but think about what you can do, you grow a few veggies for your family. If you can, raise a few chickens or ducks. My ducks are laying now. I am not sure why at this time but I am happy with their gifts. I love duck eggs with their rich yolk and white. I only have to eat one duck egg, rather than two chicken eggs. Our eggs do cost more than cheap store bought eggs, but I know they come from healthy, free range chickens that are fed and raised properly with love.  Their are now many cities that now allow you to have up to 4 chickens in your back yard. It is well worth the time and effort. 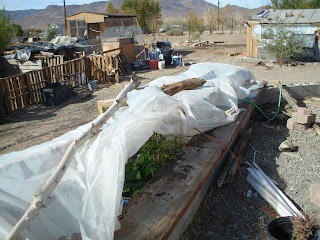 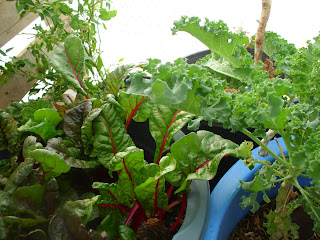 On the subject of meat, we buy organic raised meat from neighborhood farms. I know most of the people that I buy from. I have been on their farms and seen the way they treat their animals. If you can, buy from a local farmer's market. The smaller farms generally treat their livestock better than the huge farms with many thousands of chickens or cattle. One of the reasons, I will not eat lamb or veal is because of the horrible way they are raised. I long ago saw it first hand and determined I would not support an industry that treats animals that way.  I have raised my own chickens for most of the years. We also raise rabbits as well.  My rabbits have a house for warmth and a yard to play in.  I raise them to provide quality manure for my garden. This year I will breed them, and some of babies will go to meat.  I do believe in self sufficiency when possible. Times are coming where all of us will need those skills. 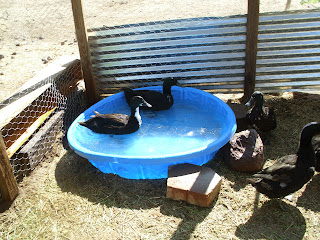 All for now, Kate Freer, the herbladyisin

This is the two brands I trust because they test their imported products for contamination, E-Coli, and heavy metals in a US lab.  I have now been using a number of their products for over two years including Moringa powder. DO NOT buy Moringa products unless the company states that they test for heavy metals and contamination. If you do you are risking your health. Organic certified can still contain E-coli, dirt, bugs, weeds, filth and insects.  This is the way it is folks.
My #1 choice is Banyan Botanicals Organic Moringa Powder here

Posted by Cathryn Freer at 9:07 PM